I'm Marta from the Typeform Support team. Nice to meet you👋 ! I'm here because I want to give you some more clarity about Typeform's new pricing plans.

As you may know, we recently introduced a new set of plans for new customers, which are all now live. If you're an existing customer don't worry – this won't affect the current plan that you're on. The price you pay doesn't change and neither do the features or response limits you already have.

But if you're thinking of changing plans it's important you understand what the differences are between the existing tiers and the new ones so you can make the right decision based on what you need to do with Typeform.

I've put together a series of videos below explaining the differences between the new plans and their equivalent "old" plans (or "existing plans" we should probably say, if you're a current customer). I've also included the comparison tables from this Help Center article to help give you an overview.

So let's break down the plans...

We've changed the way our Free plan works, to give you the ability to use all of our features and build smart typeforms using unlimited Logic Jumps and Hidden Fields. With the new Free plan you can now create and publish as many typeforms as you like. The new Free plan lets you collect 10 responses per month, whereas the old Free plan allowed you 100 responses.

Here's a more detailed explanation of the differences:

Breakdown of the differences between new free plans and old free plans: 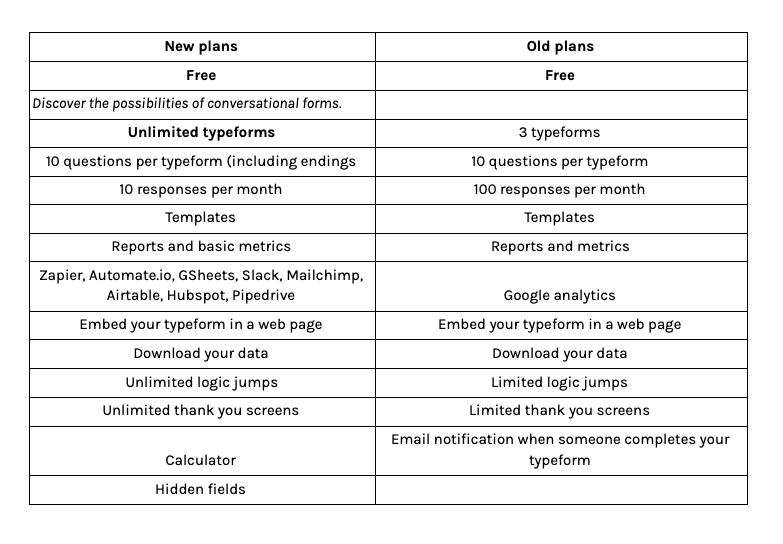 Let's have a look now at the main differences between the old Essentials plan and the new Basic plan. The Basic plan supports Hidden Fields and unlimited Logic Jumps, which wasn't the case with the previous Essentials plan. Monthly response limits for Basic are less than Essentials (100 v 1,000).

Here's the full lowdown of what's included in each:

Breakdown of the differences between the Basic plan and the Essentials plan: 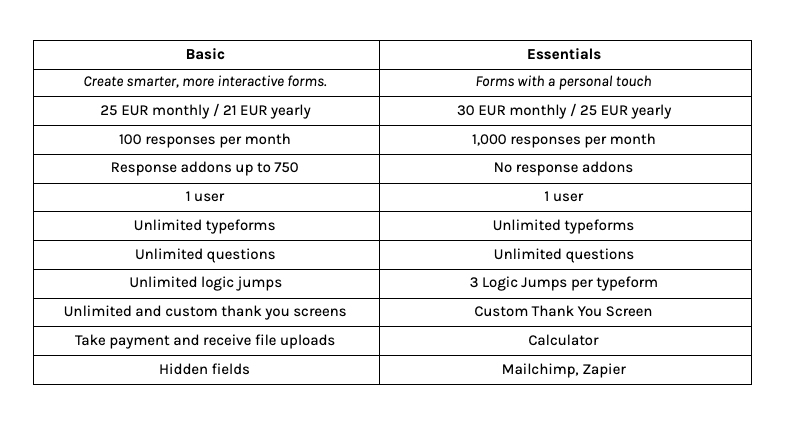 Plus vs Professional plan

The old Professional plan is now longer available for new Typeform customers, replaced by the Plus plan. Let's explore the main differences between the two plans, which include the kinds of features that are available, the number of users, and the response limits:

Breakdown of the differences between the Plus and Professional plans: 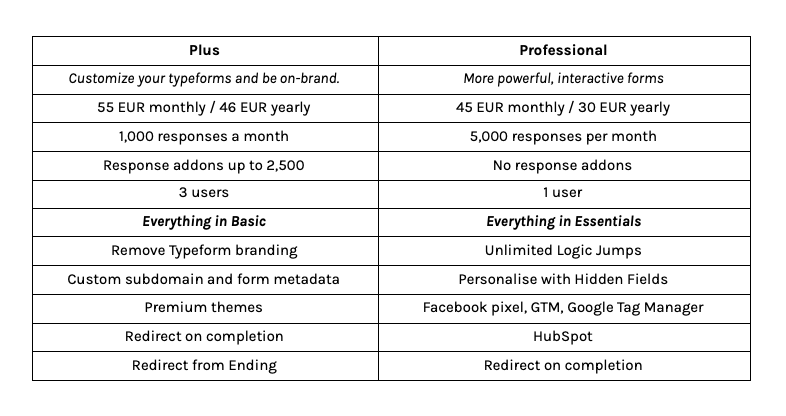 Finally, let's take a look at the changes to our top tier plan. The previous Premium plan has now been replaced by the Business plan for new customers. Let's have a look at what you get in each one. They are pretty similar in general, with some key differences in terms of the number of team members allowed:

Breakdown of the differences between the Business plan and the Premium plan: 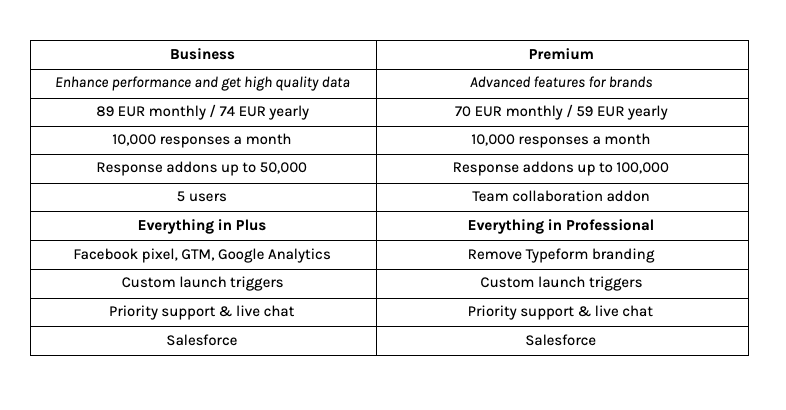 I hope you find this useful but if you have any doubts about switching to the new plans or your account please feel free to reach out to our support team. And of course, you can find all the information about the current plans on our pricing page.

This is so useful  . The community is going to view this content endless times in the coming weeks. Thanks for putting this together

Thanks  that helps. some things I noticed for my plan (Professional) that have also cropped up in the Community:

I, personally, am happy to see the new plans and understand the rationale but i do want to really understand the optimal timing to make the change on my own.

Login to the community